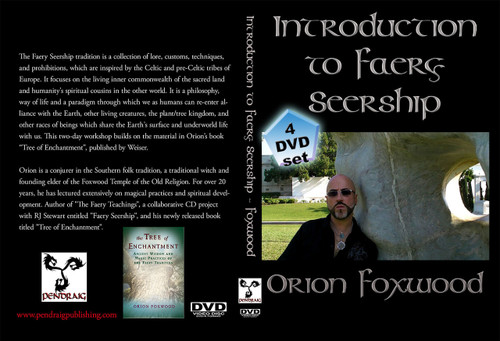 The Faery Seership tradition is a collection of lore, customs,techniques, and prohibitions, which originate in the Celtic and pre-Celtic tribes of Europe. It focuses on the living inner commonwealth of the sacred land and humanity’s spiritual cousins in the other world. It is a philosophy, way of life and a paradigm through which we as humans can re-enter alliance with the Earth, other living creatures, the plant/tree kingdom, and other races of beings which share the Earth’s surface and underworld life with us. This DVD set was filmed during a 2-day workshop.

Orion is a conjurer in the Southern folk tradition, a traditional witch and a founding elder of the Foxwood Temple of the Old Religion. For over 20 years, he has lectured extensively on magical practices and spiritual development.

This amazing set was unavailable for 2 years but is back in print.

Elfhame's Children: The Covenant of Witch and Faery by Veronica Cummer