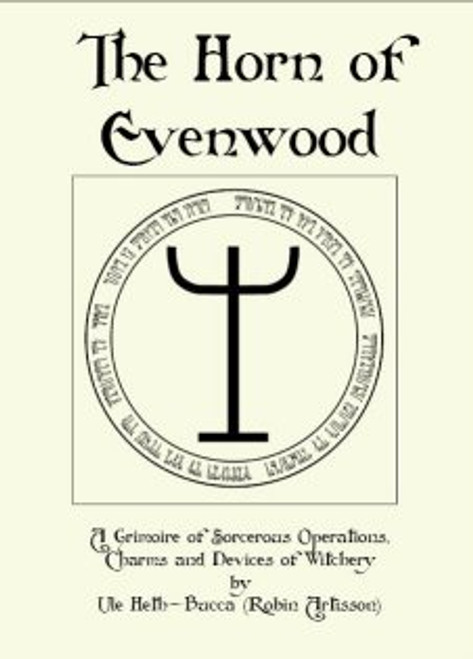 The Horn of Evenwood: A Grimoire of Sorcerous Operations, Charms and Devices of Witchery by Robin Artisson (Ule Helth-Bucca)

The Horn of Evenwood, Also called ‘The Master’s Book of Conjury’ or ‘The Witchfather’s Bloodless Bones’, is a true book of Art, a Grimoire of sorcerous operations, charms, and devices of Witchery. Based on well-worn patterns and operations of Traditional sorcery and European Witchcraft from the 16th-19th centuries, this manual of magical arts provides a complete working system of Craft-sorcery which taps into the numina of the British Isles folk-tradition, the Luciferian mysteries of the Witchmaster, traditional wortcunning, the Rades of Edric and Godda, and the hidden roads to Faery-Elfhame. Included are incantations, conjurations, instructions in the application of the Ten Pillars of Sorcery, "The Service of Sigils" working, and the operations of ‘Biting the Tongues of Serpents’, ‘Summoning the Witch-Dream by Moth Flight’, ‘Binding the Lovers One to the Other’, ‘The Fruitful Working of the Womb-Seed’, and ‘A Pavis from Foul Imprecations’, all of which are intended to instruct an initiate in the use of this timeless arcane system.

The Crooked Path Journal 3: A Journal of the Nameless Art Fall 2008

The Crooked Path Journal: A Journal of the Nameless Art: Issue 2 Summer 2008

Masks of the Muse: Building a Relationship with the Goddess of the West

Feasting from the Black Cauldron by Amaranthus